This blog will be referring to the home knitting machine, a flat-bed knitting machine that range from a simple manual knitter (the user has to manipulate stitches to form a pattern) to the more complex electronic machine (electronics or software create the patterns but casting on/off, shaping and moving the carriage are all still done by hand).

Home knitting machines are called flat-bed because they have a horizontal base that is clamped to a table.  This base or main bed holds the needles (that make the knitting) and can be made of metal or plastic.  Metal is more robust but can rust and is a lot heavier than plastic to carry around with you. The picture above shows the flat bed of a Knitmaster 550 machine.

The needles are made of metal and have a latch to hold the yarn. They have a butt that is used by the carriage to move the needles. The needles can only knit in one direction.  If you want to create purl stitches the user needs to take the stitches off and turn them around manually (can use a circular knitting needle or a garter bar accessory).  These needles can be different sizes for different types of machines.

Different types of knitting machines have different numbers of needles, the more common standard gauge machine bed usually has 200 needles and more needles cannot be added. Wide garments like blankets needs to be done in two pieces that are sewn together. The fine gauge machine has 250 needles.

A device called a carriage knits the stitches by moving the needles forwards and backwards as it is moved across the bed.   Patterns and shaping can be made by holding the needles in different positions.  Carriages can range from the  very simple (like the Bond carriage above) the complex (like the Empisal Knitmaster 700 below). A stitch dial is used to allow slightly thicker or thinner yarns to be knitted.

These latter types of carriage have knobs to control stitch tension and various levers and dials for pattern stitching.

A sinker plate is a metal device like the one above that holds the yarn and has various brushes and disks that help to hold the yarn in the needles.  You can also get a different type of sinker plate for weaving thicker yarns into your knitting.

It is also possible to get special carriages that produce lace knitting and a simple type that just moves the needles and is good for intarsia.

The first knitting machines were simple but knitters demanded more functionality.  The 1950s introduced row counters and tensions masts (also known as yarn brakes).  The latter enabled yarn to run quickly and smoothly through the carriage.   Whilst early machines could use cakes of yarn, they were small and you had to make sure you did not run out of yarn.  So, manufacturers produced small cones of yarn for the home knitter to use that could create a jumper with one cone and the tension masts could be adjusted to work with different thicknesses of yarn, and more than one cone of yarn.

Demand grew for more elaborate patterns and in the 1960s punch-cards and punch-card readers were added to create stitch patterns for tuck stitch, slip stitch, intarsia and fairisle.  The number of stitches that could be controlled expanded over the years and in 1971 24 stitch punch-cards became the most popular width for standard gauge machines (30 stitches for the Knitmaster 370 fine gauge machine).  Blank punch-cards could be bought and created using a handy punch device (shown in image above).

In the 1980s electronics were introduced that used mylar sheets with a 60-stitch pattern capability.  Machines came with a set of mylar sheets that contained a variety of stitch patterns, but users could buy blank sheets and create their own by marking the sheets with a special pen.   In the 1990s Brother electronic machines were introduced with PPD that had 555 built in patterns, the last machine they made, the Brother KH970, had 665 patterns. Knitmaster introduced the EC1 to replace the Mylar sheet. A PE1 could be added to increase the stitch pattern from 60 to 200 needles. They were replaced by the single P10 device.

Today mylar sheets are rare and expensive to buy, and the electronic controllers are getting old and difficult to repair. Many users have turned to DesignaKnit software to create patterns that cover the full width of the machine.  This is particularly useful for double jacquard designs.   The software may save you from creating punchcards, but it needs a windows laptop to run on, and for some the user interface is difficult to learn. However, the software does allow you to explore and save your ideas, patterns, individual measurements etc. and many people love it for this reason. The software costs about £200 – £300 pounds (depending upon the version) and can be bought from a range of machine outlets. You do need to add the cost of buying the appropriate cable to connect the laptop to your particular machine (another £100 – £200).

A Brief History of Machine Knitting in the UK.

What is a Domestic Knitting Machine - Part 2? 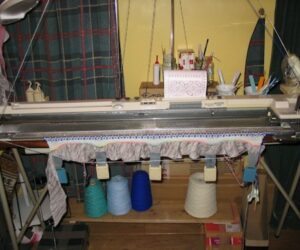 Is Machine Knitting an Expensive Hobby? 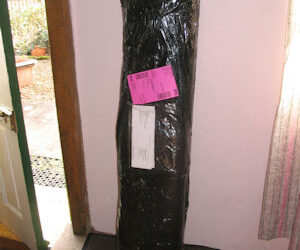 Should I buy a Knitting Machine off Ebay?

What do I need to start Machine Knitting?

What are you looking for?